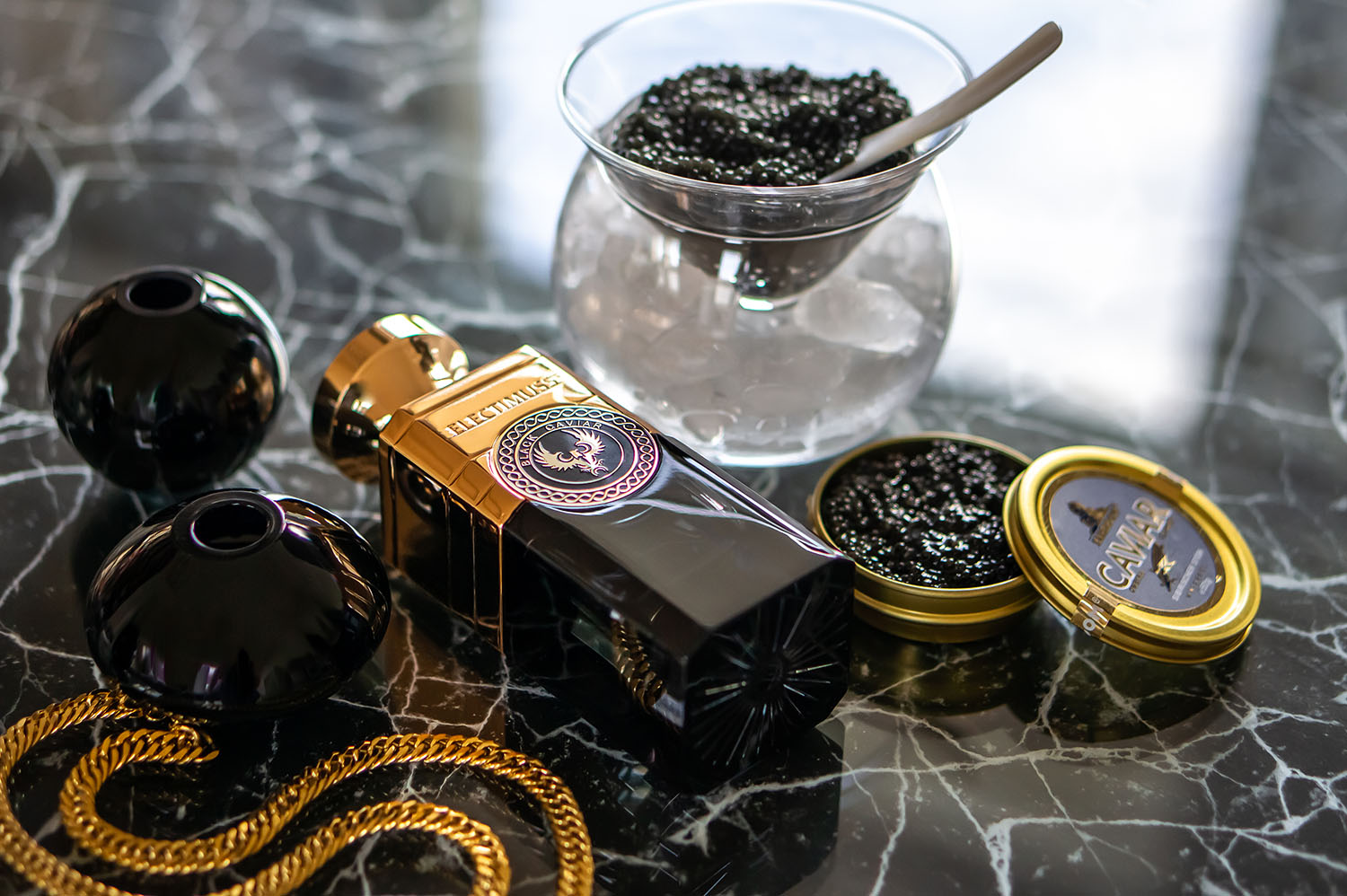 Black Caviar as a perfume, can it work? Electimuss London review

Black Caviar is a rather expensive treat, so when I saw a perfume by the same name on Electimuss London website I was intrigued. Is it possible to make the aroma of caviar work as part of an attractive perfume composition? Read the review to find out the answer! And to make things even better, I also tell you what I think about one more star from Electimuss line — Octavian. Full text below!

You can jump to the different sections of this post by using the navigation menu below. Or read the whole text and find out which of the fragrances wowed me the most!

To choose the best

Electimuss London have recently made a splash in the fragrance community. You’ve probably seen their striking bottles popping up on many perfume blogs gathering enthusiastic reviews. So you might be asking yourself, is it worth the hype or are we seeing a typical wave of freebies sweeping the fragrance community?

Want to be in the know about the latest and best perfume releases? Subscribe to my monthly newsletter and be always up to date in the niche fragrance world!

My answer is: Electimuss London have created a line of smart, original and at the same time wearable perfumes put into stunning bottles. A new contender in the upper luxury region totally worth getting excited about! 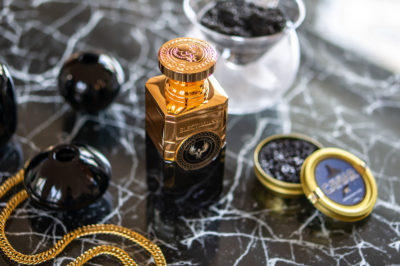 Diligent as I am, I wanted to find out more about the brand’s background. The story seems to be one of a phoenix rising from the ashes. My research revealed the following: the brand was initially conceived around 2011 by Michael Boadi, the man behind such perfume houses as Boadicea the Victorious, Illuminum and more recently Valhalla and Nosegasm. All of his brands have a strong personality, both visually and in terms of fragrance theme. Electimuss was created to embody the glory of Ancient Rome with its taste for all things luxury, including perfume. The highly concentrated fragrances were put into bottles referencing gladiator armor.

First perfumes were launched 2013, followed by more next year. After that the trail goes cold. Whatever the reason, Mr. Boadi ended his involvement with Electimuss shortly thereafter and the brand was slowly forgotten. One can still find some older reviews from way back then lurking on the internet.

It might have been the end, were it not for the fresh energy (and probably also money) brought in 2018 when Electimuss was taken over by a team with a new vision. Founding director and ex brand manager of Boadicea the Victorious teamed up with the original creative director of Thameen to provide creative direction for Electimuss. 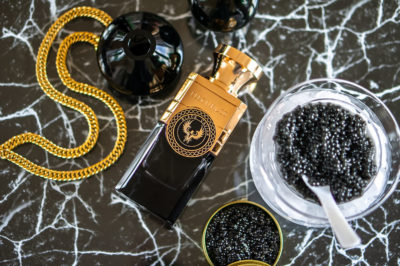 Bottle design was changed completely (apparently for the better, the new bottles are stunningly luxurious), many compositions were let go of, others reworked, the aesthetics streamlined and updated to look and feel more modern. What remained is the story dedicated to the splendor of Ancient Rome, the high concentrations of perfume oils and the superior quality of the materials used. Like a phoenix that shines even brighter after the rebirth!

So I was pretty excited when I recently discovered Electimuss. I love all things ancient history, and perfumes that reference old gods and glorious (and often ruthless) emperors instantly piqued my interest. Romans really knew luxury. The vastness of their empire, military successes and high wealth concentration allowed the lucky few to literally have it all — however expensive, rare or difficult to get, delicacies, precious stones and metals, woods and also perfume materials were brought to Rome from all over the known world to help the upper classes show off and compete in wealth displays. On the flip side, most people lived in poverty and abject conditions (especially viewed from our modern standpoint) only to die early from now easily curable diseases. But hey, let’s concentrate on the bright sides of history here!

Among all the perfumes I was most intrigued by the name Black Caviar — caviar is as rare a note in perfumes as it is expensive as a delicacy. So I was wondering if it’s really possible to make a fragrance with a recognizable caviar accord that’s at the same time unconventional enough to be niche and wearable enough to actually make you want to spend the money on it. Turns out it is! 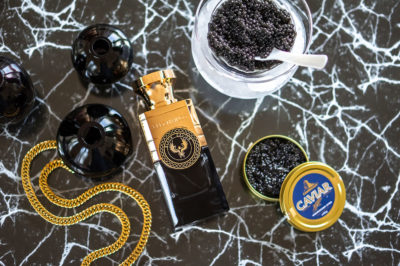 And if you are wondering about the connection to Ancient Rome — sturgeons that produced black caviar were a well known gourmand treasure in the Roman Empire. Given that any fish roe was considered a delicacy, it is safe to assume that sturgeon caviar was among the most praised foods reserved for elite, and even then only on special occasions. There are reports of the fish being exported from Azov and Caspian regions dating back to Ancient Greece. The trade continued and flourished with the rise of the Roman Empire and its increasing taste for everything exotic and luxurious. So the fragrance name really has a legitimate historical link, because black caviar was indeed something enjoyed by the Roman crème de la crème.

To make sure I’m not tricked by my imagination (and because one can never have too much caviar) I actually hosted a feast for my bf to refresh the taste and smell in the memory. So yeah, the props in the picture are the real deal. Everything for the sake of research, of course 😉 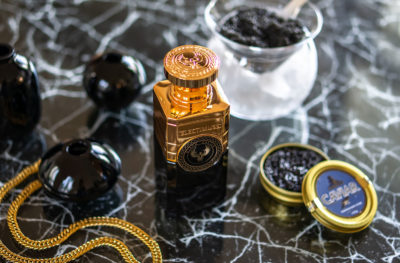 Caviar is a rather subtle note, especially since it’s surrounded by other components in the perfume. But in Black Caviar it is present and central — it’s part clean salty ocean wind, part distinctive marine protein feel (much softer than ambergris, I’m experiencing it as a sort of velvety texture rather than as a smell). Instantly recognizable and unique!

Everything else is masterfully arranged around it. Slightly medicinal oud that goes great together with the ocean salt vibe, fresh and herby sage in the opening that adds texture as it develops and metallic lavender adding to the woody-herby-bitter-salty foundation.

Black Caviar from the Nero Collection is a perfume of relaxed dominance. Not flirting with the masses by adding sweetness. Leans towards masculine, but I’m seeing it as a power scent for all genders. Projection and longevity are incredible (it’s pure perfume after all!). If there is a fragrance that can boost confidence — this is it. Because it’s true to the brand’s name — Electimuss means choosing the best, enough said.

M y first reaction when I sprayed Octavian was “wow”. It is an incredibly beautiful oud-rose perfume, spiced up by some saffron and rounded by amber with peppery undertones. The oud-rose genre has been done many times before. It might even seem that every brand and perfumer want to try their hand at it at some point of their careers. So it’s extremely difficult to stand out from the crowd with a fragrance employing this structure. 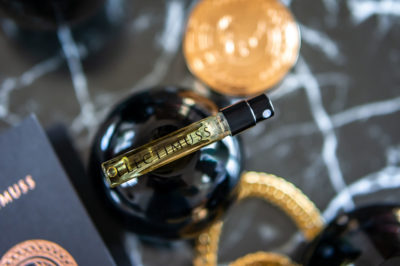 And yet, Octavian from Electimuss stands a head taller over the competition. And I don’t mean the price alone — it’s habitat lies in the rarefied upper echelons of the most luxurious department stores and boutiques. The investment, however, is totally justified if one wants to own one of the best fragrances of its kind.

It’s a totally subjective opinion, but I believe to be able to smell the high quality of the materials that Electimuss have used here. Their website says that the perfumes in the Emperor collection that Octavian belongs to are produced in limited quantities due to the high quality of the oils used that are not available en masse. I’m a skeptical person, so normally would brush such blurbs off as pure marketing blah-blah. Here I am inclined to believe what I read because of what I smell.

On me Octavian opens with an intense semi-animalic (drops of sweat on the shiny black skin of a thoroughbred Arabian stallion) oud with a powdery peppery texture. Soon after this woody oud base gets covered by a transparent balsamic and spicy amber veil. Rose appears after 15 minutes or so and adds velvety softness, rounding off the rougher animalic edges. The composition is deep, dark and rich in nuances. The ingredients evolve on the skin, adding to the pleasure of watching Octavian throughout the day. Since it’s pure perfume, the longevity and silage exceed expectations.

A classy and luxurious oriental perfume, worthy of special evening occasions. Or any other days one needs something extra!

Where to buy Electimuss

Electumuss is a young perfume house and given their price point they can only be found at some select top retail locations. Having said that, their perfumes are of course available through their own website which offers worldwide shipping. The benefit of ordering through their own site is that you can select a sample pack and try some of their perfumes first. You can also find Electimuss online on luckyscent.com (who also ship almost worldwide), noblesscent.com and dorperfumes.com.

What’s the most luxurious fragrance memory you have? Share your stories in the comments below and let’s indulge in them together!

P.S. If you are interested in the coolest and most exclusive fragrances and beauty news, subscribe to my monthly newsletter! 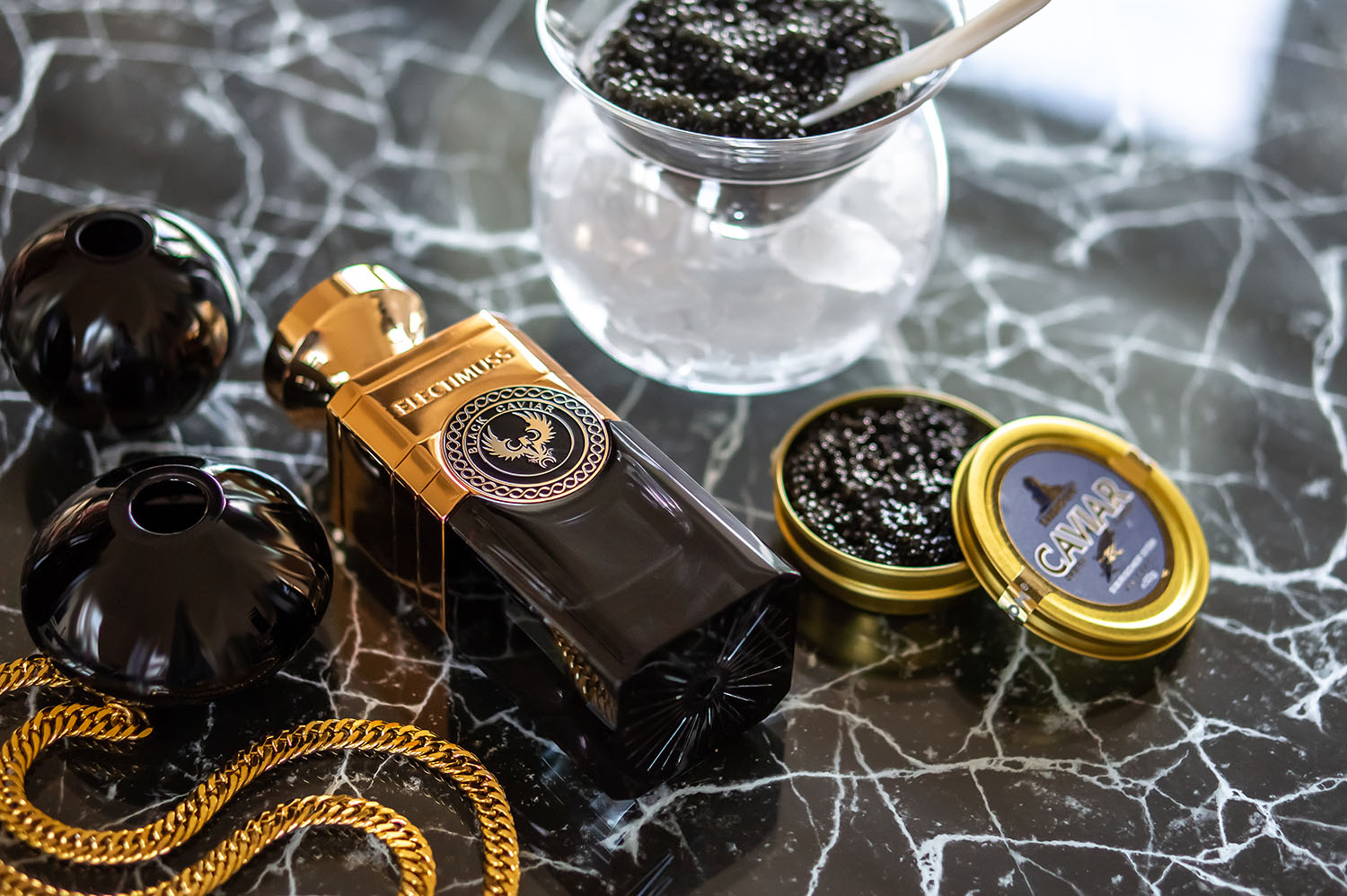 From Japan to Desert Oasis: 17 from Fo’ah

17 is the new fragrance from Fo'ah. This niche perfume is a perfect scent to welcome spring, because it is inspired by memories of cherry blossom. Sounds good? Find out…
Artistic

I recently had the great pleasure to meet Martine Micallef and Geoffrey Nejman, the founders of M. Micallef, one of the most renowned niche perfume houses, for a live interview…
Floral

Can a perfume be both light and strong? It can! Etat de Grace from Plume Impression is a great example of airy elegance and expressive depth. My review of this…

A splash of sun: Amabile by Xerjoff 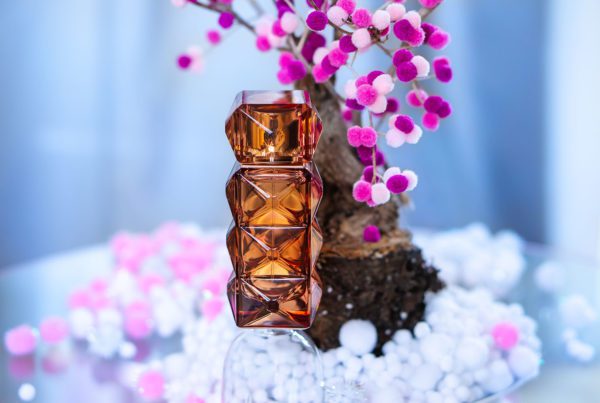 From Japan to Desert Oasis: 17 from Fo’ah 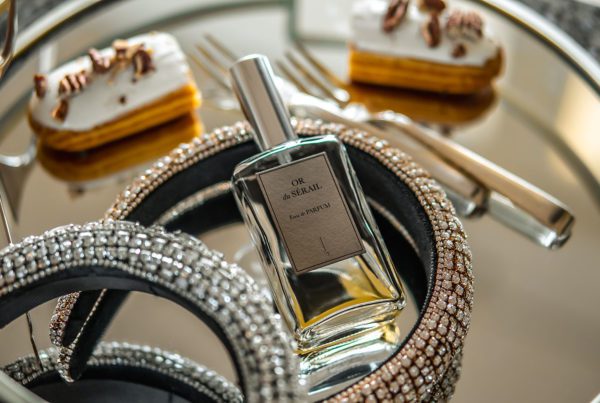 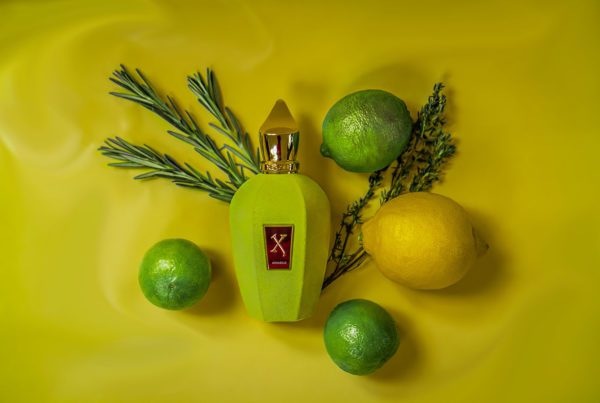 A splash of sun: Amabile by Xerjoff

Hi! I’m Yana and this is my blog dedicated niche perfume and beauty. I’m happy you are here and hope you can find inspiration, beautiful fragrances and product recommendations that make life better!

Get the latest news about the best niche perfumes, skin care that works and discoveries that make life better! (By submitting you agree to processing of your email address for newsletter purposes)

This website uses cookies to improve your experience while you navigate through the website. Out of these, the cookies that are categorized as necessary are stored on your browser as they are essential for the working of basic functionalities of the website. We also use third-party cookies that help us analyze and understand how you use this website. These cookies will be stored in your browser only with your consent. You also have the option to opt-out of these cookies. But opting out of some of these cookies may affect your browsing experience.
Necessary Always Enabled

Any cookies that may not be particularly necessary for the website to function and is used specifically to collect user personal data via analytics, ads, other embedded contents are termed as non-necessary cookies. It is mandatory to procure user consent prior to running these cookies on your website.